Several months ago I wrote a post on my decision to do the 2014 MOMAR and the team mates who decided to join me in this adventure. This race report will outline the details of that adventure, my rating of the MOMAR and what I recommend for other racers of this event.

Many of us took the day off on Friday as we needed to pack everything up and commute from Coquitlam to Cumberland. This took most of the day and a lot this time is spent waiting for the ferry, sitting on the ferry and then working your way off. Big thanks to Gord L who used his vehicle. We had a lot of looks from people who saw 4 people in his SUV with luggage loaded in the back, two kayaks on top and all our bikes on the back. Gord even loaded up the kayaks before putting them on top. I have to say it was a very efficient loading.

While loading we discovered that Tristan had forgotten his shoes. Steve decided to go to his house which was close by and pick up some shoes for him as they took the same size. As a result, poor Steve missed the ferry (he was a solo entry and we were a group of 4). We barely made it on and were one of the last vehicles. 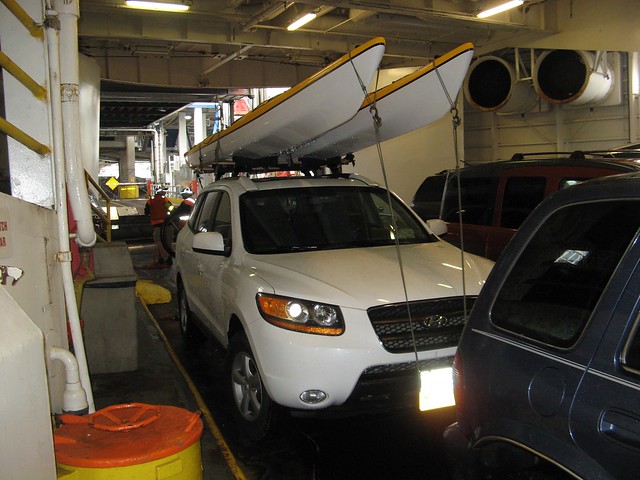 Last ones on the ferry.

The trip was relatively relaxing. Ate some crappy ferry food and chatted a bit before unloading. I went with the manly burger while other went with more healthy choices. 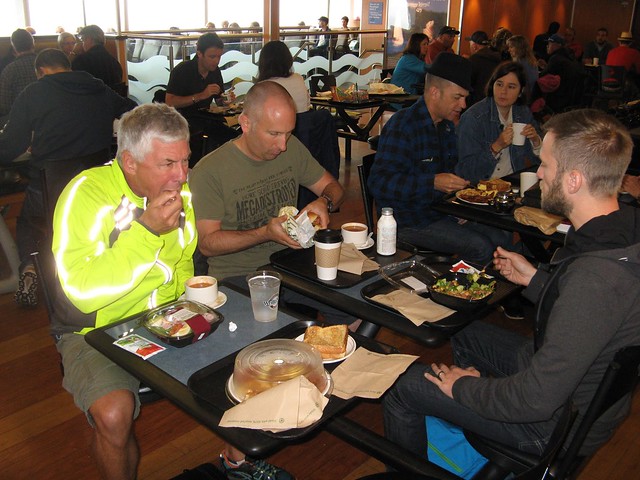 We went to a running store in Nanaimo and Tristan picked up some new shoes. Upon my repeated requests I dragged the team into the new Nanaimo Cabelas store. I could tell I was way more excited than everyone else and had to actually contain my desire to buy way too much stuff. To the amusement of my team I still ended up coming out of there with my arms full.  If you like camo, you will love this store.

We then headed out to Gord T’s place who is a former Coquitlam SAR member who now volunteers with Comox SAR. We dropped off our stuff, said hi, and then headed to registration. 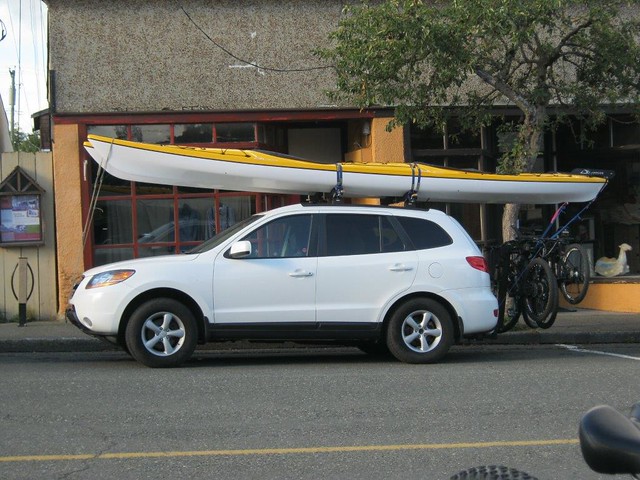 Registration was at the Riding Fool Hostel in Cumberland which was only 15 minute drive away. 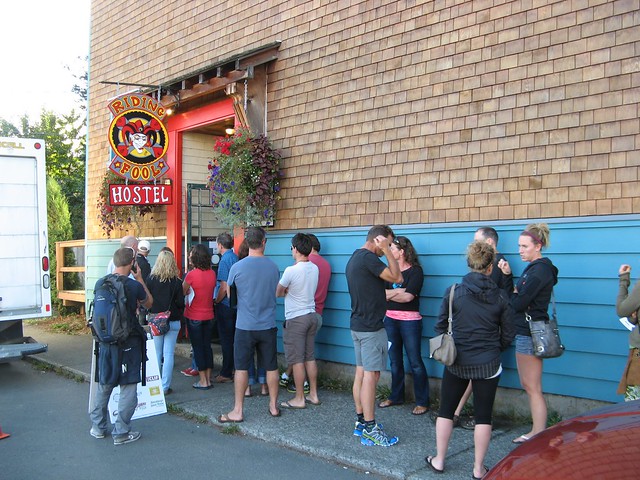 We got there early so we decided to head over Waverley Pub in Cumberland for a quick beer. 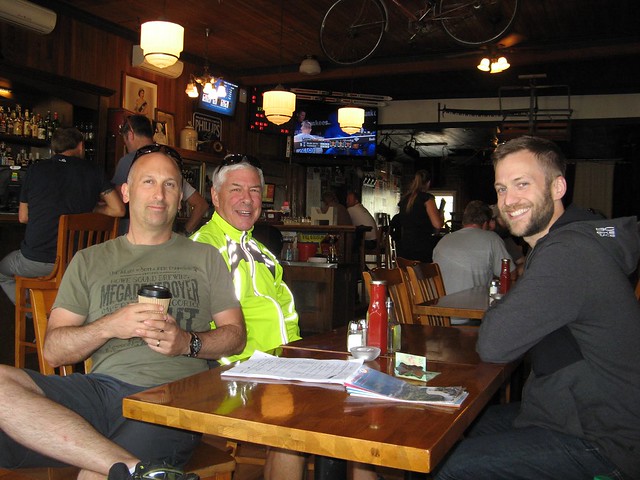 The Waverley is a very cool pub which really summarizes my experience in Cumberland. Great service, superb selection of beer and awesome atmosphere. Even though we were there for less than an hour we really enjoyed the experience. 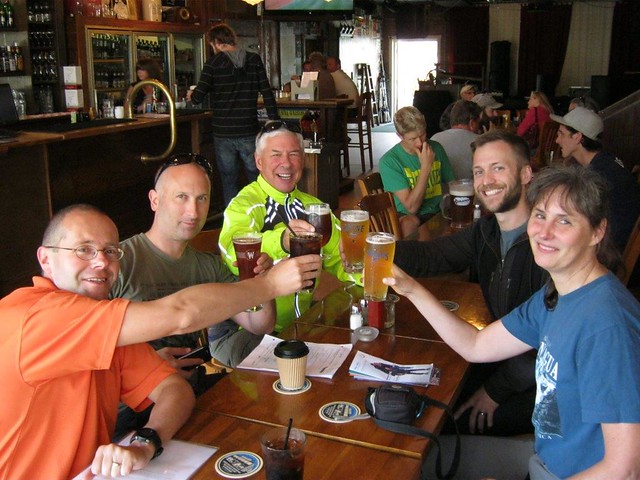 Beers at the Waverley Pub in Cumberland

The line up took about 30 minutes to get through but since they were handing out beer and pretzels the time really flew by. 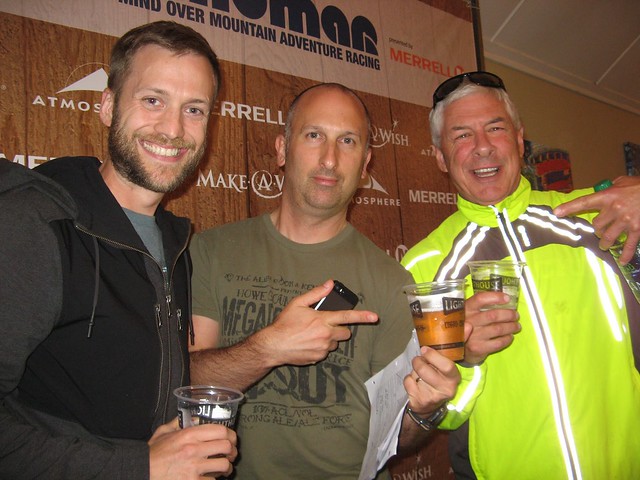 We picked up our race bibs, a map showing where to dump the bikes and kayaks and our tshirt. 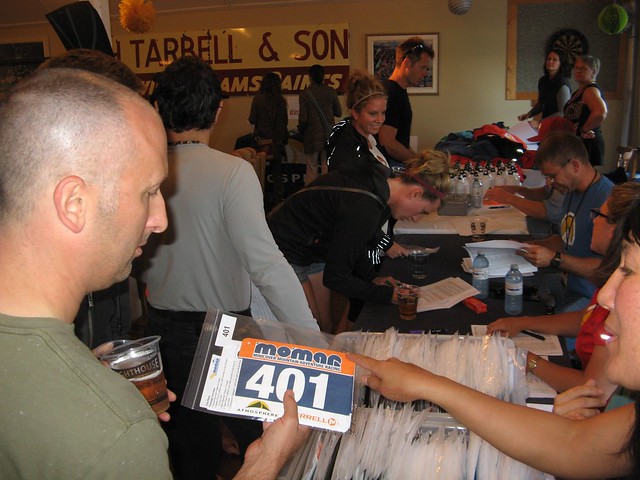 There was also a spot where you could pick up some really nice speciality t-shirts as well. 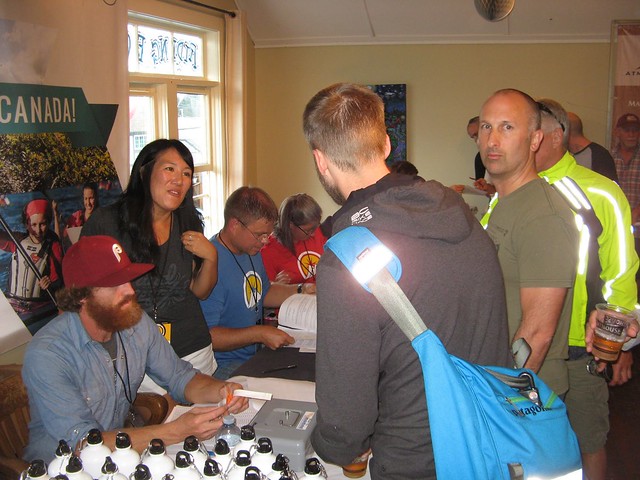 Just before you get your race package they have a backdrop where you get your team picture taken. This is a great idea and everyone is having a blast posing for this. As you can see, we enjoyed the opportunity to get silly which was a nice break from the anticipation of tomorrow’s race day. 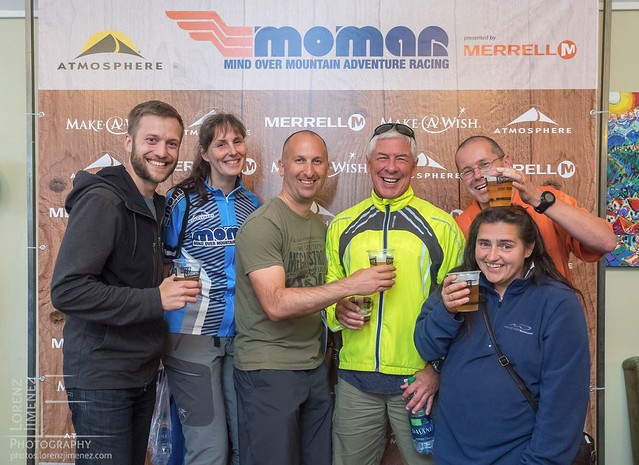 While some of us stayed in his house, Gord L and I pitched tents in his backyard to free up some room in the house. This worked out well and gave everyone lots of privacy. We decided to make a few pizzas for dinner and began production. We made about 5 large pizzas which fed everyone and gave us some leftovers for the next day. For the most part the pizzas were delicious. The was mostly due to the fantastic crusts that Gord T made in preparation for our arrival. Huge thanks to Gord T! Unfortunately, Tristan likes those little fish things which were put on one of the pizzas and accidentally went into my mouth. Yik!

Since it had been a while since we had seen Gord T we did have some wine and beer. While I tried to limit my alcoholic intake we did seem to be drinking way more than I normally would before a race. It was exciting to see Gord and be in a new place with fantastic people so it was very much a celebratory atmosphere even before the race. 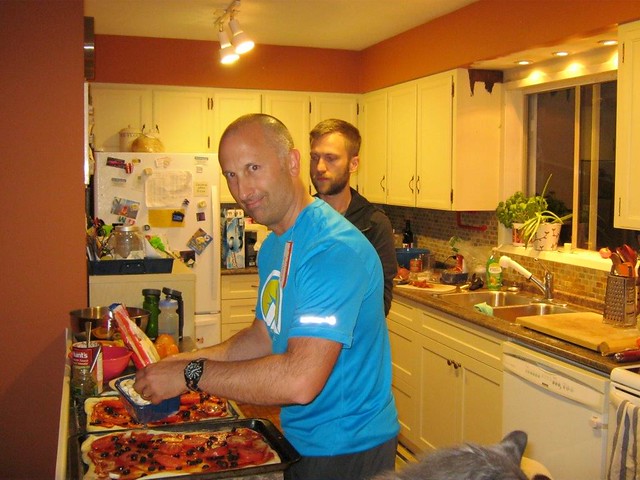 We went to bed before midnight as we knew we had to get up at the ridiculous time of 5am. We hauled ourselves out of bed and got sorted out. We had to drop off the kayaks and bikes.

As you can see below it was still very dark by the time we put the kayak on the beach. I was super sleepy from the early start and the beers the night before. 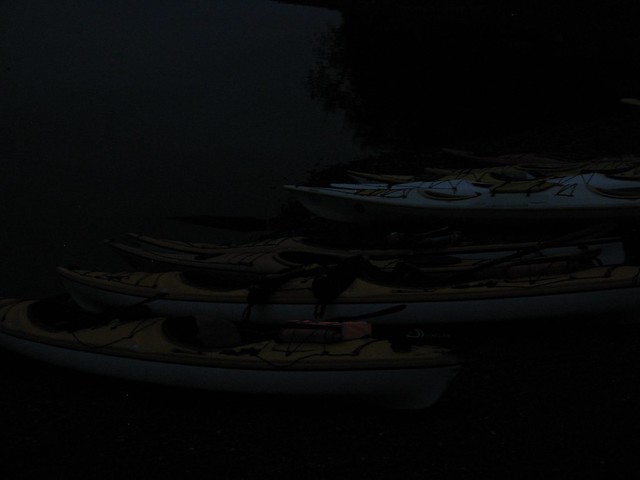 I felt better when I looked at Tristan as he seemed as tired. 🙂 We dropped off the kayaks then headed to the bike drop. 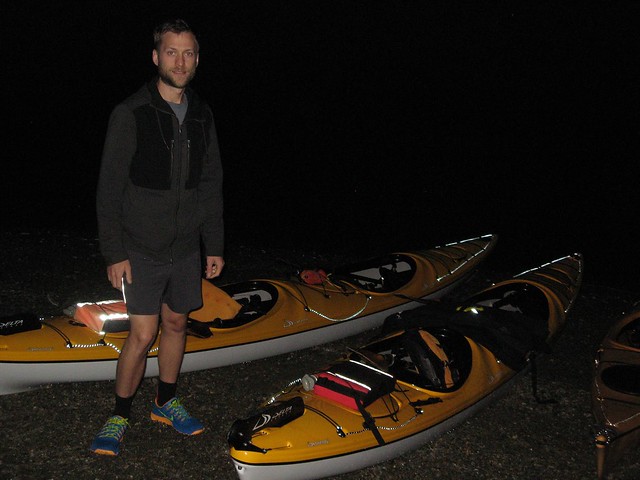 Lots of rental companies were dropping off kayaks for people. This seemed pretty well organized. I could tell many people rented at the start line as there wasn’t a lot of care of equipment as everyone bumped into each other. 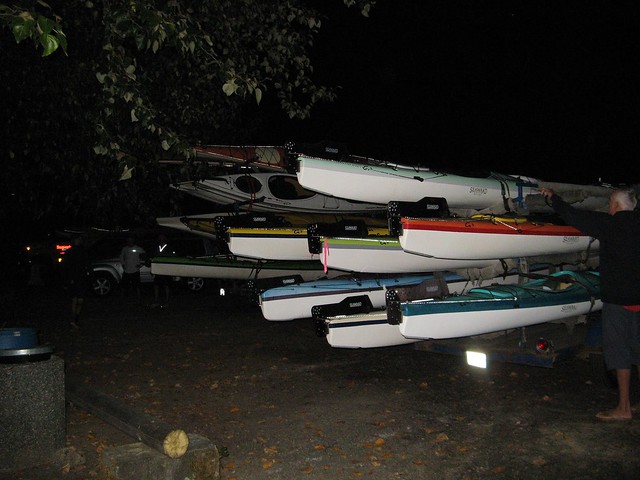 At the bike drop the sun had risen and we could finally see more than a hundred meters. 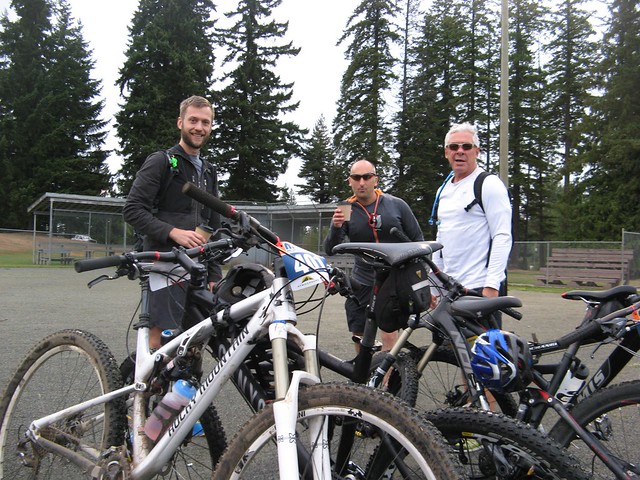 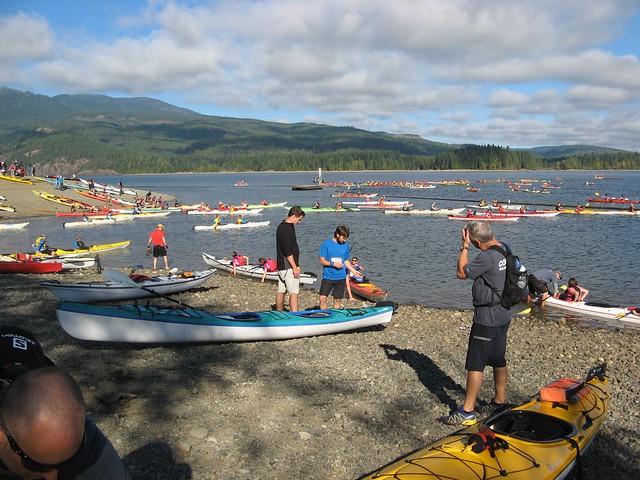 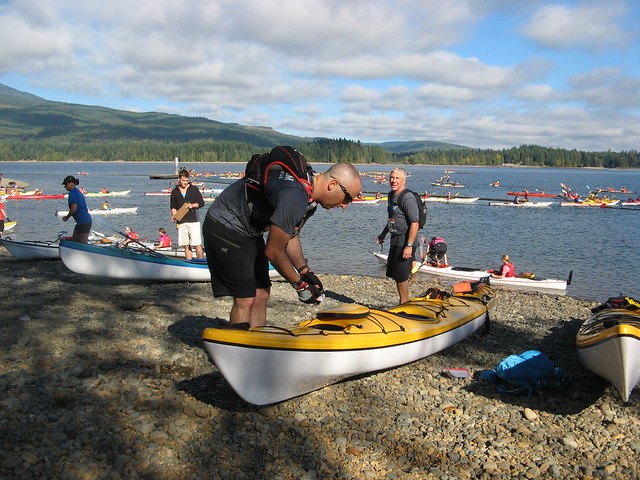 I have ran 7 trail running races this season and done a lot more distance training than normal years so while I felt pretty confident in the running component my training in the kayak was minimal and my time on my mountain bike was even less. This was painfully obvious during the race. 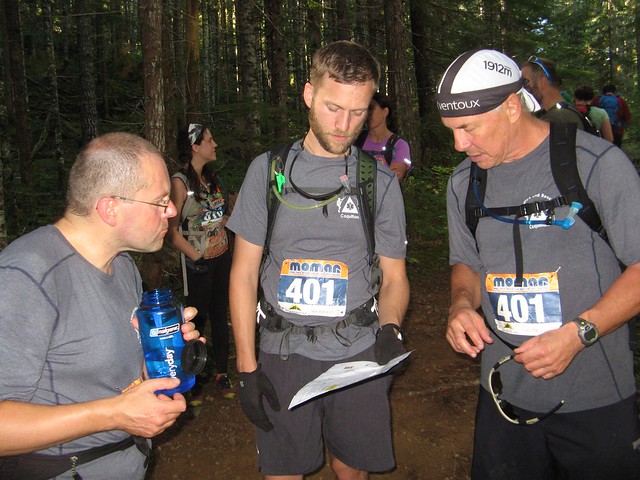 Trying to make sense of the poorly designed map 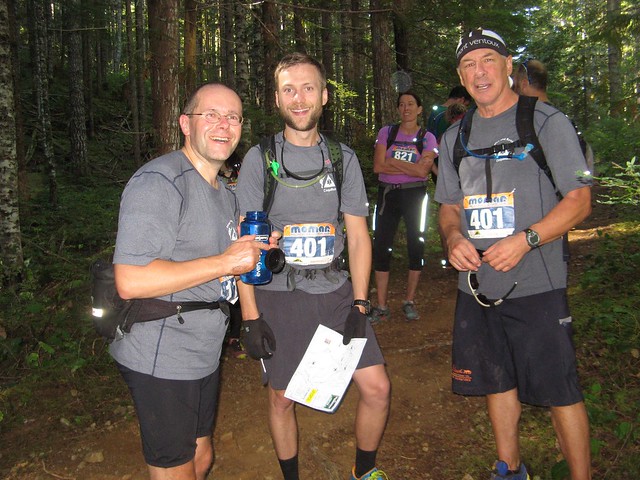 Giving up on the terrible map and enjoying the moment 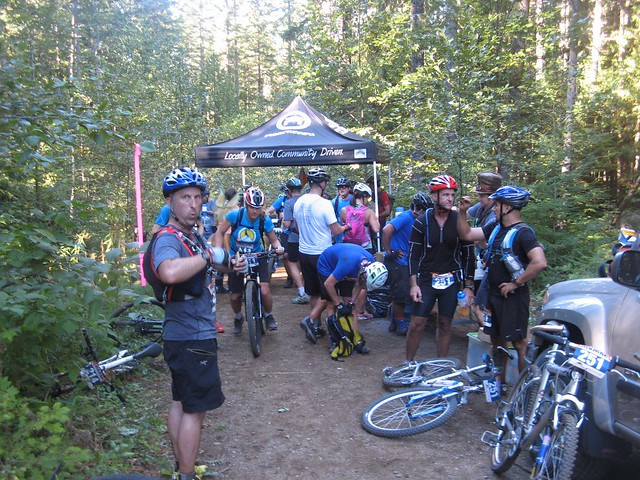 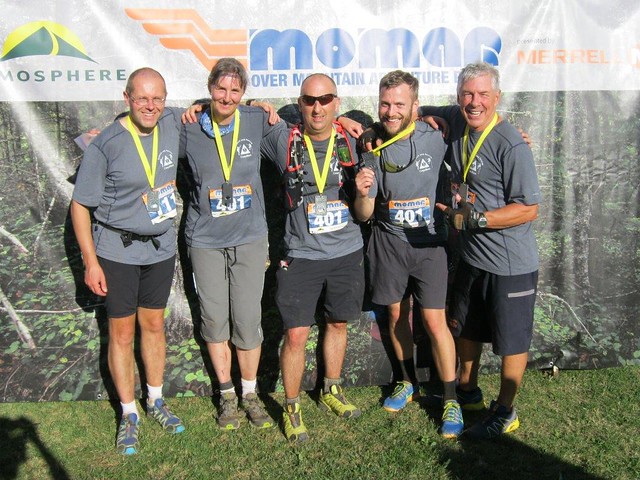 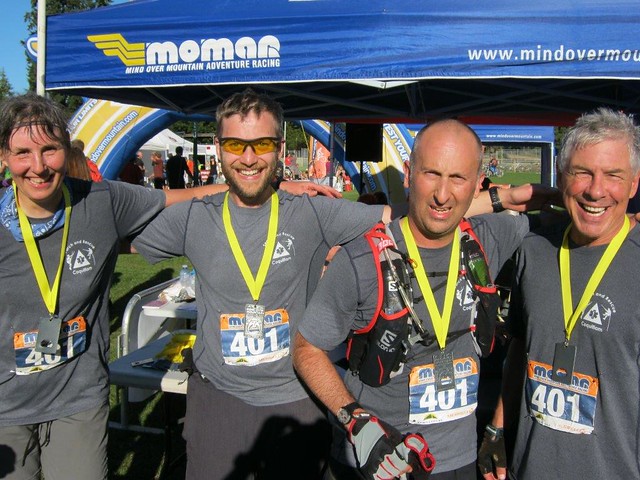 After the race we went back to Gords place and got cleaned up for dinner. Dinner was inconveniently located at the top of Mt Washington which is about a 45 minute drive from Cumberland. Now if the dinner was amazing as advertised and the award ceremony was entertaining (such as the BC Bike Race) then the drive might be worthwhile. Unfortunately, this was not the case at this event. The food was crap and the award ceremony was worse. Not only could we not hear what the announcer was saying but the seating was spread out all over the facility so in many cases you could not even see the stage. There was no recap of the event, no pictures, no video and nothing entertaining at all. When you combine this with the food and the long drive it is not hard for me to highly recommend you avoid the dinner and just stay in Cumberland. This is unfortunate as the rest of the event was run very well.

The advertised “gourmet dinner” is obviously a matter of opinion and likely relative to what you are used to. However, when you are referring to the dishes by color as we did, I would have to argue that it is not gourmet. The white stuff was okay but my preference was the brown stuff. We were so tired and hungry that poorly cooked jail food would have tasted good and this food was tasting adequate… 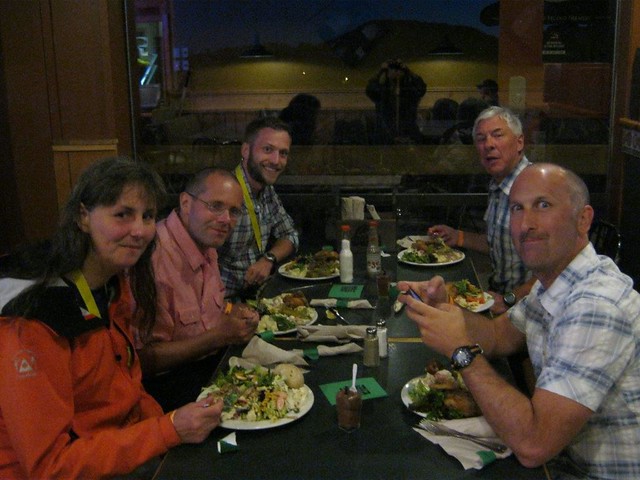 Eating the “Gourmet” Dinner on Mt Washington. Again, I am giving the Stink Eye for some reason 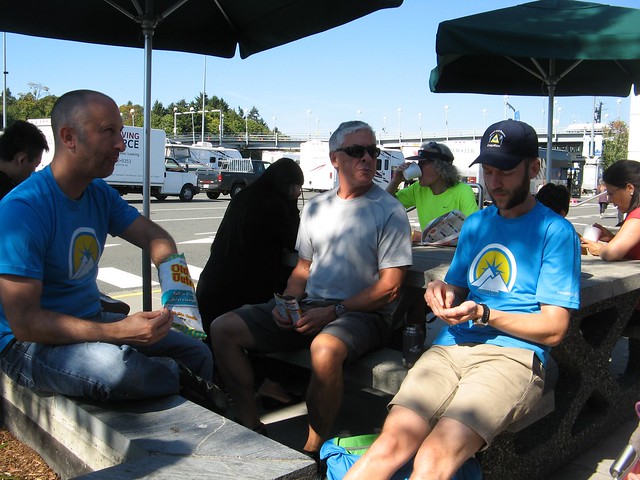 Waiting for the return ferry in Nanaimo